There's been a chorus of claims from idiots like Louie Ghomert and various NRA types that if only there had been someone packing in the theater, many lives could have been saved. This is such an intensely stupid claim that it's hard to believe it requires refutation. However, never underestimate the stupidity of the denizens of Lower Wingnuttia.

First off, we'll start with the obvious...

* Pitch black theatre with the only light coming in flashes from the screen (strobe effect)
*Loud noises, including gunshots, from screen, loud gunshots in theater
*Clouds of tear gas
*Hundreds of screaming people literally falling all over each other in a total panic 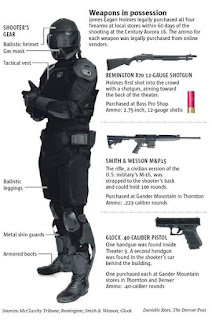 ...who, in addition to wearing head to toe bullet stopping tac gear, is packing a 12 gauge shotgun, an AR-15 assault rifle with a 100 round clip and a Glock .40, methodically pumping out 4 rounds per second or so.

Under these conditions even an expert pistol marksman is highly unlikely to get of a hit in the tiny area of vulnerability in the shooter's tac gear. Not to mention, odds are you could put 12 rounds center mass into this guy with a compact 9, the most common handgun used for concealed carry, and not leave anything more than a bruise.

But it gets worse...

Imagine if there had been multiple people packing. Now you have a bunch of people firing from a bunch of different places. Crossfire vectors everywhere. Two more theaters at full capacity are on either side, separated only by paper thin walls.

What you have now is a recipe for total disaster. But it gets worse....

Imagine you're a cop who happens to be in a position to respond almost instantly. You walk in to this darkened theater completely blind; It'll take 90 seconds or so for your eyes to adjust to the darkness. Shots are coming from every direction from a number of shooters. Who do you shoot?

From any of these scenarios the probability of a better outcome is virtually nil while the odds of an even worse outcome are astronomical.

If you have any remaining doubts about what happens when a guy with a handgun tries to take on a guy with an AR-15 in full tac gear, take a look at the following videos, courtesy of weapons testing company BrassFetcher...

Here's a super high speed video that shows the damage from a 9mm high velocity round using ballistic gelatin that mimics human flesh. This type of round is the most common for concealed carry and is easily stopped by the type of gear the shooter was wearing.

Here's a high speed video of a Remington .223, the round used in the Colorado shooting, into ballistic gelatin. Notice the massive trauma caused by the "spall" effect as the bullet tumbles into the gel.

Caveat: I am a gun owner. In fact, in addition to a 9mm and a .40 cal, I have high power weaponry that's actually superior to what the Colorado shooter had. But I didn't have to trade in my brains to get my guns. Like the vast majority of gun owners, I support common sense regulation of firearms.
Posted by John Avignone at 10:02 PM