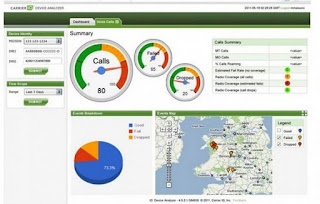 More details have come out about CarrierIQ, a hidden app on smart phones that tracks user data, since our original story. The short of it is Android users now have more than a dozen options to detect and remove CarrierIQ from their mobile devices. Other mobile device users, including Blackberry, Windows Mobile and Apple users, iPhone, iPad, etc., are out of luck. Mostly. Apple users cannot remove CarrierIQ, but they can block it. Maybe.

This isn't an Android rocks, Apple sucks post. The iPhone is lovely little piece of technology, if no longer cutting edge. However, the CarrierIQ issue highlights the disadvanteges of completely closed operating systems like iOS compred to open operating systems like Android. In just a week developers have added more than a dozen new apps to the Android Market that detect and remove CarrierIQ while iOS users are still waiting for Apple to do something, anything.


Android users can detect Carrier IQ, everyone else is out of luck

Android users have a multitude of options in order to detect whether Carrier IQ exists on their smartphones, with at least a dozen applications available through the Android Market.
...
BetaNews tested out two of the available options -- BitDefender's Carrier IQ Finder and Lookout Labs' Carrier IQ Detector. The tests were performed on a Samsung Galaxy S II Skyrocket running Android 2.3.6 on AT&T's network, and both found Carrier IQ present but didn't indicate whether or not it was active.
...
We also spotted a few apps that claim to freeze the process that runs Carrier IQ's hidden application. These include Trey Holland's Bloat/CIQ Freezer Free and RDMSoft's Carrier IQ Process Killer. Without more extensive tests, we can't independently verify these actually work as advertised, but customer reviews are generally positive.

These various apps may or may not be 100% effective at detecting CarrierIQ. We haven't had a chance to test them. But the instructions we posted last week are 100% effective, at least for Android users.

While iOS users are waiting for a fix that may nver come, they can at least disable CarrierIQ, though it appears they have to do it every time they boot their mobile devices. Details from LifeHacker...

Carrier IQ has made quite a stir with its ability to track everything you do on your Android phone, and it turns out that it comes preinstalled on the iPhone as well
...
Luckily, there's an easy way to turn it off. Just head to Settings > General > About > Diagnostics and Usage, and tap "Don't Send". That's it! We've also updated our original post on Carrier IQ to include this new information. If you're curious about the more technical bits of this discovery, hit the link below.


Carrier IQ Is on iOS | Chpwn 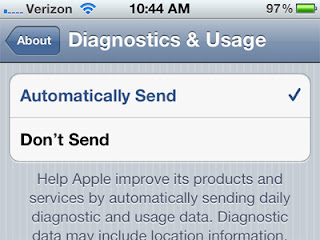 CarrierIQ may or may not be as bad as some of the more sensational stories have claimed, but either way, who wants it? Blackberry and Windows Mobile users, you're still SOL...
Posted by John Avignone at 9:15 PM