The Official Republican Party Platform for 2012 - Send In The Clowns 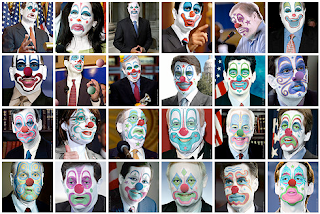 Raising taxes on the middle class isn't raising taxes. St. Grover said so.
Close our embassy in Iran!
Teachers are only in it for the money.
The media has a well known liberal bias.
Reality has a well known liberal bias.
Ignorance is bliss. We're the party of bliss on tap.
Democracy means making sure only the "right" kind of people vote.
9-9-9! (English translation: No, no, no!)
The 1% rule! All hail the 1%!
Poor people should work harder so rich people can get richer.
Make damn sure everyone over 21 votes on November 12!
Brown people aren't people. Corporations are people.
Amend "show your papers" laws to prevent more accidental snaring of rich white people.
There is no such thing as sexual harassment.
Validate the birth certificate!
Forced blowjob required for employment? No big deal. Voluntary blowjob between consenting adults? VERY big deal!
We love freedom! Keep government OUT of our personal lives! Except for women, in which case government should be all up in that vagina.
Gay people aren't people. Corporations are people.
Force poor children to work as janitors. Poor people never work, so it's the only way to
teach poor kids how to make money, except for selling drugs, as all poor people do.
No, really, make poor kids work!
Logic: Corporations are people, people have the right to free speech, money is speech,
therefore money is people, too.
Ignorance, hate and intolerance are family values.
More is really less. The middle class is paying more in taxes under Obama.
Jesus loves us, be He hates the rest of you filthy heathen fuckers, and especially poor people.
Poor people aren't people. Corporations are people.
From now on the "family values" party shall be led by a corrupt soft porn author and three
time adulterer forced to resign from Congress in disgrace and a viagra popping, 3rd world
sex toruist, drug addicted lying gasbag.
Global warming is a scam cooked up by greedy scientists to take advantage of poor oil
companies, but gay marriage is a dire threat to our very existence as a society.
Pizza is a vegetable.
As fat as we wanna be!
It's more important to believe in something than it is to know anything.
Science is the work of the devil.
Education is the work of the devil.
Reality has a well known liberal bias.
We love soldiers! Except for gay soldiers!
Let the uninsured just fucking die, already.
Every media outlet on the face of the Earth lies, except Fox. They always tell the truth. As far as you know.
As stupid as we wanna be!
A librul media conspiracy forced Herman Cain to keep a secret female "friend" he gave money to for 13 years and never told his wife about.
Donald Trump would so make a good president!
Sarah Palin isn't a con artist corrupt clown!
Herman Cain isn't a con artist corrupt clown!
Newt Gingrich isn't a con artist corrupt clown!
Donald Trump isn't a con artist corrupt clown!
Rick Perry is so not an idiot!
Chris Christie isn't a grossly obese bully.
Rick Santorum is, um, frothy.
We love Mitt Romney! We love both of them!
Okay, so we don't love Mitt Romney, but WTF are you gonna do?
God is old, fat and white, just like us!
Who gives a crap about Uz-beki-beki-stan?
Democrats want to destroy our way of life!
Liberals want to destroy our way of life!
Muslims want to destroy our way of life!
Gays want to destroy our way of life!
The media wants to destroy our way of life!
Reality wants to destroy our way of life!
It's class warfare when the poor fight back.
Ask yourself every day, "Who would Jesus foreclose on?"

Nothing in this platform is intended to be a factual statement.
Posted by John Avignone at 2:42 PM