The Big Takeaway From the 2012 Election - It's the Turnout, Stupid 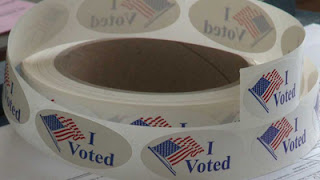 There's lots of talk already and there will be a lot more about what this election means what lessons we can learn. Some of the conclusions are obvious. The GOP has an old fat angry white guy problem, as in there just aren't enough of them anymore. The Hispanic vote share continues to rise, topping 10% for the first time, and went overwhelmingly for Obama. Women and younger voters went overwhelmingly for Obama as did more educated whites.

All of these are scary trends for the GOP that have been in the making for years and will continue to affect elections for many years to come. Conservatives are already claiming Obama doesn't have a mandate because he got only 40% of the white vote. In point of fact, Obama won every single demographic group except white males, and more specifically, low education Deep South white males.

It's actually these older, more conservative white males that have lost the mandate in America, not Obama. The demographic reality is the once Grand Old Party is in now in serious jeopardy of ceasing to exist as a national party.

To me, the big takeaway is it's the turnout, stupid. The lesson to be learned for progressives is when we turn out, we win. The big winner issues in 2012 were LGBT rights, women's rights, minority voting rights and marijuana, all issues dear to the hearts of progressives. The big losers were billionaires out to buy the election, the Tea Party and Karl Rove. 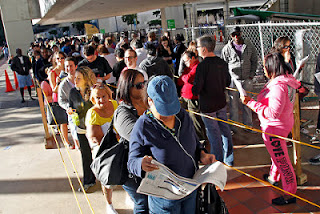 When we turn out, we win. Handily.

After the 2010 mid-terms, the MSM and the punditocracy hammered into us that the country hard turned hard right and the Tea Party was the new political powerhouse. This election proves just how wrong they all were. The 2010 electorate was very different from 2008. There were 41 million fewer voters in 2010 than 2008. This smaller electorate was more conservative and less representative of the country as a whole. The country didn't suddenly become more conservative. Progressives did a lousy job of turning out their voters.

This year's electorate is very similar to 2012 and very different from 2010. But the GOP ran as if it was still 2010, picking far right candidates in races they should have easily won. In 2012 the GOP had their best chance in years to take the Senate. There were three Democratic senators in their sights, all of whom should have been vulnerable. But the ultra conservative Tea Party base of the GOP dominated the low turnout primaries and nominated a bunch of nutbags. Not only did the nutbags, Todd Akin and Richard Mourdock, for example, all lose races that should have been easy GOP pick-ups, the Dems actually picked up two senate seats. That's a five seat swing, huge by Senate standards, that represents a complete and total rejection of the Tea Party and the hard core right wing of the GOP base.

Those who think the GOP has learned a lesson from 2012, don't bet on it. There's every indication they'll actually move further to the right and take up permanent residence in a land of conservative make believe '50's sitcom America that doesn't exist now and never did. There's every indication that GOP primary voters will continue to pick fundamentalist extremists and misogynist idiots. If anything, they'll go for even crazier candidates.

I plan to spend the next year gaming out strategies to convince progressive voters to turn out for mid-terms in numbers at least close to the turnout in presidential years. If we can come close to matching wingnut turnout in off year elections, we can not only keep the Senate, we can take back the House. But the numbers show it's not going to be easy.

In the end it's simple math. The numbers show the 2010 electorate was much smaller, whiter, more male and more conservative than in 2008 or 2012. We lost. The lower the turnout, the more likely Democrats and progressives lose. in 2008 and 2012 turnout was much higher. We won. The calculation is easy. The larger the turnout, the more likely we win. 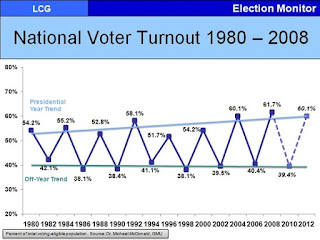 Keep this in mind, progressives, as we head toward the 2014 mid term elections. If we don't turn out in big numbers, we will lose seats in both houses and at all levels in state and local races. If we turnout in big numbers, we'll pick up seats and win races at all levels. It really is that simple. So, let's get to work now and make sure we get our voters to the polls in 2014.
Posted by John Avignone at 4:09 PM