Nikki Haley tried to grab credit for the Confederate battle flag coming down as Republicans in the House insisted the flag be allowed to fly on federal land.

Am I the only one who was put off by Nikki Haley making the signing of the bill to remove the flag a giant media circus with her center ring? Is it naive to think that a quiet, dignified, closed ceremony with only the families present would have been appropriate? I don't mind her taking a victory lap, though it was primarily the pressure from corporate America and the RNC, not Nikki Haley, that led to this, but to do it at the signing of the bill was tasteless. It's particularly inappropriate considering that less than a year ago, when she was running for reelection, Haley vigorously defended the presence of the flag at the Statehouse. Her idea of a fix was to sugar coat the reality with  peppy phone greeting.


What I can tell you is over the last three and a half years, I spent a lot of my days on the phones with CEOs and recruiting jobs to this state. I can honestly say I have not had one conversation with a single CEO about the Confederate flag.”
...
“But we really kind of fixed all that when you elected the first Indian-American female governor. When we appointed the first African-American U.S. senator, that sent a huge message.”
Haley said that she had tried to improve the perception of the state by ordering employees to answer the phone with the phrase “it’s a great day in South Carolina.”

It was also a bit weird that she referred to the "actions" of the people massacred at the Mother Emanuel Church multiple times. To my mind it was the actions of the families of the 9 at Dylann Roof's arraignment, expressing forgiveness, not anger, that led to South Carolina finally being dragged kicking and screaming into the 21st century and being forced to do what it should have done long ago.

“I will never be able to hold her again, but I forgive you,” a daughter of one victim said. “We have no room for hating, so we have to forgive,” said the sister of another. “I pray God on your soul."

I'm glad they've taken down that rag of bigotry, hate and treason, but Nikki Haley and the government of South Carolina should be apologizing, not celebrating. It's everyone who has had to walk past that flag to do any official business with their state government and everyone everywhere who has chaffed under this symbol of hate who have the right to celebrate. Does the bully deserve a victory lap for finally ceasing to beat on his bloodied victim?

This certainly has symbolic meaning in the long struggle for civil rights, but corporate pressure can't end bigotry. Legislation can't force attitudes to change. Changing the status quo, however, does lead to real changes over time. Succeeding generations grow up in a South Carolina where official displays of bigotry and oppression are no longer the norm.

Sadly, at the same time Nikki Haley was signing the bill to remove the Confederate battle flag from the South Carolina Statehouse grounds, Republicans in the House of Representatives were refusing to do the same for federal grounds. A full blown fracas ensued in Congress, once again exposing deep divisions in the Republican party.


The battle was joined Tuesday night, when Democrats offered a series of amendments to prohibit Confederate flags from being displayed at federal cemeteries, and to stop the U.S. Park Service from doing business with enterprises that sell the flags. These flags are typically displayed alongside the centuries-old tombstones of deceased confederate soldiers.
“This House now has an opportunity to add its voice to end the promotion of the cruel, racist legacy of the Confederacy,” California Rep. Jared Huffman said in a floor speech before his initial amendment was adopted Tuesday.
The measures passed by voice vote.

Outraged Southern Republicans shouted their opposition to the voice vote and chaos ensued on the House floor. All or most of the congressional delegations from Texas, Virginia, Mississippi, Georgia and Alabama, as well as majorities of the delegations from other Southern states, demanded that leadership include language protecting the display of the flag. A representative from California, of all places, Rep. Ken Calvert, R-CA, introduced an amendment to overturn the voice vote and allow the display of the flag on federal grounds, specifically federal cemeteries. Stung by immediate and harsh criticism, Calvert, issued a statement that blamed GOP leadership, and, of course, President Obama.

The amendment offered last night to the Interior and Environment Appropriations bill was brought to me by Leadership at the request of some southern Members of the Republican Caucus. The Leadership amendment would have codified existing National Park Service policy set by the Obama administration. Those Obama administration policies prohibit the sale and display of the Confederate flag on National Park Service properties, except when displayed in a historical or educational context. To be clear, I wholeheartedly support the Park Service's prohibitions regarding the Confederate flag and the amendment did nothing to change these prohibitions.
...
Looking back, I regret not conferring with my colleagues on the other side of the aisle, especially my Ranking Member Betty McCollum, prior to offering the Leadership's amendment and fully explaining its intent given the strong feelings Members of the House feel regarding this important and sensitive issue.

It was yet another embarrassing fiasco for a completely dysfunctional GOP House that can't even control its worst, most extreme members. The Confederate battle flag has been taken down in South Carolina, but it's still being waved by Southern Republicans in Congress.

In South Carolina, Republicans had used procedural tricks to stop the bill calling for the removal of the flag before finally capitulating and allowing the bill to proceed. There are two Republicans in South Carolina who deserve credit for removing the flag, and neither of them is Nikki Haley. The son of segregationist Strom Thurmond, Senator Paul Thurmond, R-SC, called for the flag to be removed in a moving speech just days after the Charleston massacre. 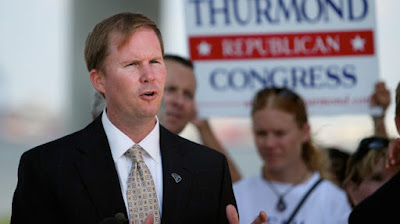 “For the life of me, I will never understand how anyone could fight a Civil War based in part on the desire to continue the practice of slavery,” Thurmond said. “Think about it for just a second. Our ancestors were literally fighting to continue to keep human beings as slaves, and continue the unimaginable acts that occur when someone is held against their will. I am not proud of that heritage.”
“Now we have these hate groups and the symbols that they use to remind African-Americans that things haven’t changed and that they are still viewed as less than equal human beings,” Thurmond continued. “Well, let me tell you, things have changed. Overwhelmingly, people are not being raised to hate or to believe that they are superior to others based on the color of their skin.”
...
“I am proud to be on the right side of history regarding the removal of this symbol of racism and bigotry from the Statehouse,” Paul Thurmond said on Tuesday. “But let us not be satisfied to stop there. Justice by halves is not justice. We must take down the Confederate flag and we must take it down now. But if we stop there, we have cheated ourselves out of an opportunity to start a different conversation about healing in our state.”

Despite Thurmond's plea it looked like Republican effort to stop the South Carolina bill, led by  Rep. Rick Quinn and Rep. Michael Pitts, the latter adding dozens of amendments to the bill to stymie any possible progress, would succeed. They might have succeeded, had it not been for the amazing, impassioned, emotional speech from Republican Jenny Horne, that finally shamed Republicans into allowing the bill to proceed.


Many people deserve credit for the flag finally being taken down, including Republicans who called for the flags removal and voted for the bill, but Nikki Haley, who only reversed her support for flying the flag when political pressure mounted, isn't one of them.
Posted by John Avignone at 4:44 PM