Are you ready for some STUPID? ESPN Sacks Wingnut Moran Hank, Jr. For Invoking Godwin 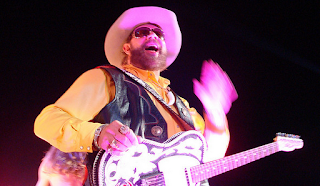 How jaw droppingly stupid was Hank Williams, Jr. on Fox & Friends this morning? So stupid that the normally wingnut friendly crew at F&F felt the need to disavow Williams on the spot. His bumbling, stumbling interview was so offensive ESPN has axed Williams from the opening of tonight's Monday Night Football broadcast.


“Come on, come on, it would be like Hitler playing golf with Netanyahu, ok?” he said. “Not hardly. In the country this shape is in, the shape this country’s in, I mean, no, I don’t think so.”

That prompted Brian Kilmmeade to reply, “I don’t understand that analogy, actually.”

Williams yelled: “Obama! And Biden! Are you kidding? The Three Stooges.”


“I just want to say that we disavow any of those comments or analogies that he’s made, at least I’m going to say that, disavow the analogy between Hitler and the president.”

ESPN responded this afternoon by dropping William's iconic "Are You Ready for Some Football" opening sequence from tonight's Monday Night Football. They released the following statement...


"While Hank Williams, Jr. is not an ESPN employee, we recognize that he is closely linked to our company through the open to Monday Night Football. We are extremely disappointed with his comments, and as a result we have decided to pull the open from tonight's telecast."

Yes, obviously Hank Williams, Jr. is an idiot, but the real problem here is he felt comfortable expressing his whack job wingnut ignorant moran opinion on Fox. And he's not alone. Many Fox viewers share Williams' views, as well as his obvious cognitive difficulties. Fox has cultivated these imbeciles. They can disavow all they wish, but Williams was only expressing the views Fox has encouraged. Fox owns these stupid assholes. It's a bit late to try to run away from the crazy now.

You can see the video of Hank's interview here...