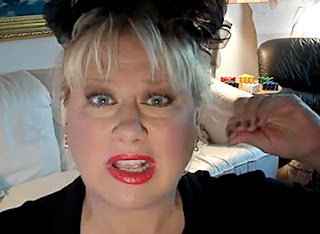 When Victoria Jackson was a playing ditzy, bubble-headed, completely clueless blond dimbo on SNL, few people knew she wasn't acting. More recently it's become painfully obvious that she really is a dumb blond. These days Jackson is a darling of tea baggers everywhere and something of a spokesperson for the Christo-fascist ignorant buffoon wing of the tea bagger movement, which is to say the majority of tea baggers.

Jackson's latest devolution into idiocy came today, when, for reasons only an imbecile could imagine, she posted a video of her weekend visit to Occupy Wall Street. If her intention was to make someone look like a dunderheaded babbling imbecile, mission accomplished. Thing is, that someone is Victoria Jackson.

Again and again Jackson tries to formulate "gotcha" questions that not only backfire on her, but backfire so completely as to be utterly humiliating. The protesters she engages refuse to take the partisan bait and answer her rabid moran idiocy with facts, patiently explained, as if talking to a not very bright small child, which, in her case, is an overly generous assessment.

The only real question this video brings up is why in the world would Victoria Jackson post a video that so completely makes a giant hairy ass of... Victoria Jackson? The inescapable answer is she, like so many tea baggers, is simply not smart enough to know she's simply not smart enough. The only possibility is she's blissfully unaware of just how blissfully unaware she truly is.

Watch it for yourself. It's comédie vérité that's at least as funny as anything she ever did on SNL, if unintentionally so.

Posted by John Avignone at 6:46 PM