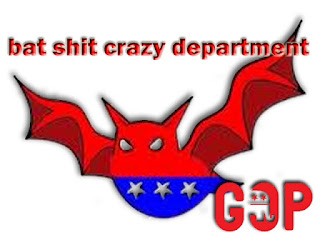 You might think this crystal clear repudiation would stop the poutrage and the spread of the bat crappery. Silly sane person! Not in Lower Wingnuttia. That's where even the most insane, ridiculous, absurd stupid asshole lies go to live on forever in the dark, cobwebbed corners of otherwise empty wingnut minds.
Posted by John Avignone at 3:41 PM