The True Cause Of The Debt Crisis Is GOP Spending

Sometimes lost in the noise surrounding the current debt crisis is a simple fact. This isn't about future spending. It's about paying back what we've already spent. It was GOP spending that got us here. During the BushCo years the GOP put trillions in tax cuts and spending on our national credit card. Now that the bill has come due, the GOP wants to play deadbeat and blame someone/anyone else for their fiscal insanity.

This first chart shows the largest single factor contributing to our long term debt is the Bush tax cuts while the second largest factor is the unfunded spending on the Iraq war. 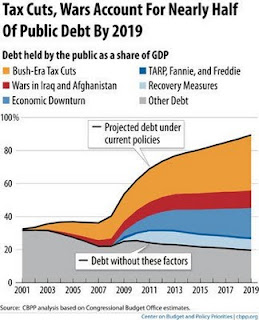 The second chart shows the effect of the profligate irresponsibility of GOP spending on our deficit... 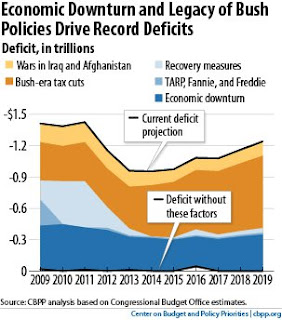 Again, this chart clearly shows that the major driving factors for our huge budget deficits are GOP spending. Again, simply allowing the Bush tax cuts to expire solves most the problem.

So, now that we know the Bush tax cuts are the one major cause of our current crisis, our deficit and our long term debt, and we know that allowing these tax cuts to expire solves most of our fiscal problems, guess what on thing the GOP absolutely refuses to even consider?

There are two possibilities here. The first possibility is that the GOP as a whole really is so bleeping stupid that they can't grasp the basic facts obvious to everyone else at a glance. The second and more sinister possibility is they know exactly what they're doing. They know their intransigence might well destroy our economy. And why would they want to intentionally torpedo our economy? Because they believe this would do political damage to Barack Obama and make him easier to beat in 2012.

Personally, I'd like to give them the benefit of the doubt and assume they're simply a bunch of idiots, clowns and fools. However, I think it's more likely that they're a bunch of cynical, hypocritical pricks who don't care who they hurt as long as they win politically.
Posted by John Avignone at 9:39 PM