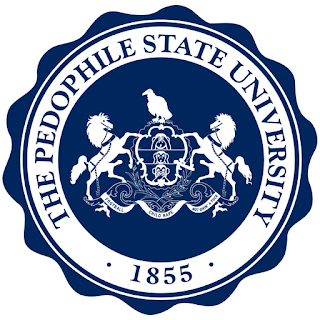 Well, well, well, it turns out that not only did JoPa know all about Jerry Sandusky raping little boys, everyone in the athletic department and school administration knew, too. And what did they do to stop this horrendous, felonious abuse that went on for fourteen fucking years? 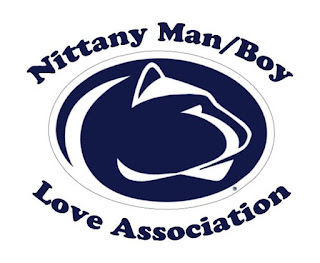 Not one goddamn thing.

In fact, they actively covered it up. All of them. Then they all lied their asses off to a Grand Jury. The independent Freeh report on the Penn State abuse scandal has just been released. Here's a link to the full stomach churning report...

...and here are some excerpts from Freeh's comments to the media...

Our most saddening and sobering finding is the total disregard for the safety and welfare of Sandusky’s child victims by the most senior leaders at Penn State. The most powerful men at Penn State failed to take any steps for 14 years to protect the children who Sandusky victimized. Messrs. Spanier, Schultz, Paterno and Curley never demonstrated, through actions or words, any concern for the safety and well-being of Sandusky’s victims until after Sandusky’s arrest.

In critical written correspondence that we uncovered on March 20th of this year, we see evidence of their proposed plan of action in February 2001 that included reporting allegations about Sandusky to the authorities. After Mr. Curley consulted with Mr. Paterno, however, they changed the plan and decided not to make a report to the authorities. Their failure to protect the February 9, 2001 child victim, or make attempts to identify him, created a dangerous situation for other unknown, unsuspecting young boys who were lured to the Penn State campus and football games by Sandusky and victimized repeatedly by him.

Further, they exposed this child to additional harm by alerting Sandusky, who was the only one who knew the child’s identity, about what McQueary saw in the shower on the night of February 9, 2001.
...
In order to avoid the consequences of bad publicity, the most powerful leaders at Penn State University – Messrs. Spanier, Schultz, Paterno and Curley – repeatedly concealed critical facts relating to Sandusky’s child abuse from the authorities, the Board of Trustees, Penn State community, and the public at large. Although concern to treat the child abuser humanely was expressly stated, no such sentiments were ever expressed by them for Sandusky’s victims.
...
The evidence shows that these four men also knew about a 1998 criminal investigation of Sandusky relating to suspected sexual misconduct with a young boy in a Penn State football locker room shower. Again, they showed no concern about that victim. The evidence shows that Mr. Paterno was made aware of the 1998 investigation of Sandusky, followed it closely, but failed to take any action, even though Sandusky had been a key member of his coaching staff for almost 30 years, and had an office just steps away from Mr. Paterno’s.
...
Their callous and shocking disregard for child victims was underscored by the Grand Jury, which noted in its November 4, 2011 presentment that there was no “attempt to investigate, to identify Victim 2 or to protect that child or others from similar conduct, except as related to preventing its reoccurrence on University property.”

I said it when this story first broke and I'll say it again. Assuming the university survives the flood of lawsuits - no sure bet - if the scumbags at Penn State can't find the simple human decency to drop their football program, the NCAA should step in and give them the death penalty. 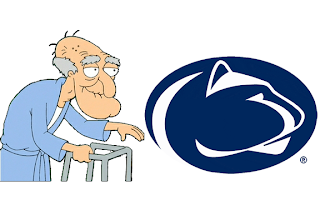 Don't bet on it. Last year they had a chance to do the right thing. The raping little boys story broke before the end of the season. As the evidence shows, JoPa and the rest of the Nittany Scumbags knew the truth, but they decided it was more important to play one more game than to do the right thing. 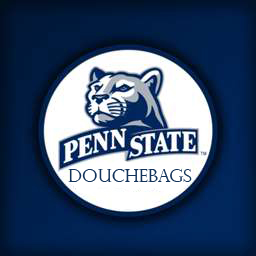 It wasn't just Jerry Sandusky who raped those little boys for all of those years. JoPa, Penn Sate's administration, the Board of Regents and by extension the entire university are all every bit as guilty of raping those little boys, as is the GOP scumbag prick then prosecutor who ignored these allegations so he could run for governor. Any on of them could have stopped it. Not one of them did. 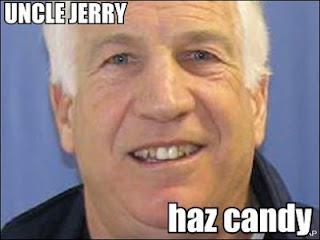 Posted by John Avignone at 8:40 PM