It's not really news that tea bagging Texas GOPers are aggressively defending their blatant attempt to disenfranchise 600,000 mostly poor, minority and/or older voters. Lying (about imaginary voter fraud), cheating (gerrymandering, voter ID laws) and stealing (the right to vote from millions) is what they do. From The Guardian, via RawStory...


Texas will launch a challenge to a central piece of civil rights legislation in a Washington court on Monday in a case the Obama administration has characterised as a fight to protect the right to vote.
...
Critics have described the move as “voter suppression” by the state’s Republican administration aimed at stripping the ballot from people more likely to support Democrats.

Federal officials say that the state is obliged to get justice department approval for the move under the Voting Rights Act. 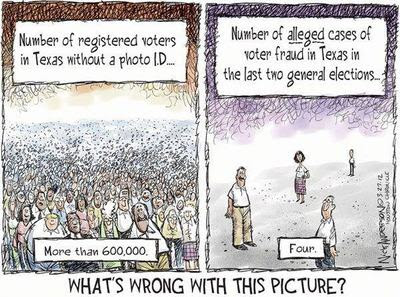 Voter fraud? It's a LIE. The only fraud is the GOP disenfranchising millions of voters, like the 600,000 voters they've disenfranchised here in Texas. Going back more than two decades, out of hundreds of millions of ballots cast there have been only thirteen documented cases of in person voter fraud and most of them were found to be unintentional.

The non partisan federal U.S. Election Assistance Commission spent two years studying voter fraud claims. In 2006 they produced a report that concluded, "There is widespread but not unanimous agreement that there is little polling-place fraud, or at least much less than is claimed, including voter impersonation, 'dead' voters, non-citizen voting and felon voters."

The lying BushCo Boobs nixed this inconvenient truth, changing the conclusion in 2007 to say there is a “great deal of debate” on the issue. Then they hid the taxpayer funded report away, never to be released to the tax paying public. USA Today did a story on the report with the unambiguous headline "Report refutes fraud at poll sites"...


The (EAC) consultants found little evidence of (fraud). Barry Weinberg, former deputy chief of the voting section in the Justice Department's civil rights division, reviewed their work. "Fraud at the polling place is generally difficult to pull off," he says. "It takes a lot of planning and a lot of coordination."

See for yourself. Despite the BushCo Boos trying to hide the report, you can still read the original.  Here's a link to the original EAC report, before the lying, thieving BushCo Boobs changed the conclusions...

Don't let the GOP get away with disenfranchising millions of voters. Sunlight is the best disinfectant here. Don't believe the lies. Educate yourself about the facts. Then, spread the word...
Posted by John Avignone at 9:10 PM