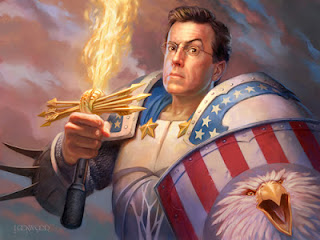 Did you know any practicing Catholic in good standing can become Pope? Yep, it's true. It's also true that pressure has been mounting on the Catholic Church for some time, now, to select a Pontiff from the New World. That's why good friends of ours started a grass roots Facebook campaign to draft practicing Catholic in good standing Stephen Colbert to be the next Pope. From the draft Colbert page... 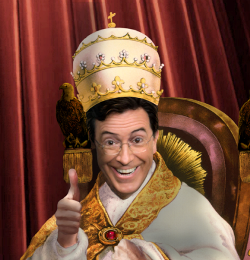 The time has come for a New World Pope. Draft Stephen Colbert for Pope!
Description
It's a little known fact that any practicing Catholic in good standing is elligable to become Pope. It's also a little known fact that Stephen Colbert is a practiciing Catholic in good standing. It's also a fact that for decades, now, pressure has been mounting on the Church to select a Pope from the New World.

Given this convenient coincidence of facts, the answer is obvious. The time has come.

Draft Stephen Colbert for Pope is not affiliated with Stephen Colbert, drafting, the Catholic Church or any other person, thing, idea or organization.

We couldn't be more proud to be the first to bring you this exciting development. Who better than Stephen Colbert to become the next Pontiff?  Stop by today and "Like" this page, then pass it on to every upright ambulator you know! Acording to little known by-laws of the Vatican, if the draft Colbert page gets 1 million likes, Stephen automatically becomes the next Pope. As far as we know... 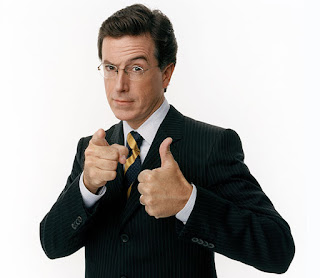 Posted by John Avignone at 9:35 PM