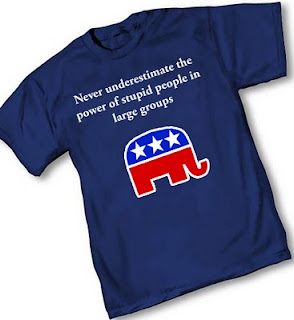 Here we go again... The Tea Bagger/GOPhools in the House are yet again threatening to shut down the federal government in a fit of ideological pique, this just months after the last time these immature idiots held the government hostage to their brand of loonytoonian tea bagger ideology.

Just how stupid are they? They got their asses handed to them the last time they held the government hostage. Polls showed the public specifically blamed the House GOPers for the dysfunction in Washington. Even their own pollsters have been telling them they're not just abdicating their sworn duty to govern, they're committing political suicide...

In a memo circulated widely on Capitol Hill, GOP pollster Bill McInturff warned that the debt-limit debate had “shattered confidence in our political system and everyone involved.” Voters lost faith in the ability of both President Obama and congressional Republicans to “make the right decisions about the economy,” the memo said. But congressional Republicans had taken the bigger hit, it added, with 81 percent of those surveyed saying they had little or no confidence in the judgment of the GOP.

Veteran political analyst Charlie Cook, editor and publisher of the Cook Political Report, said if lawmakers continue down this path, the 2012 election could bring “the biggest, broadest anti-incumbent year of post-war history,” with voters indiscriminately tossing out lawmakers in both parties, pulling the lever “against anybody’s name they recognize.”

“The debt ceiling debacle is almost a horrible metaphor: It’s as if a bomb went off at 800 Pennsylvania Avenue and sent shrapnel flying in every direction,” Cook said. “I don’t know what these guys think they’re doing, but it looks like they’re committing political suicide.”

By their own numbers, EIGHTY-ONE PERCENT of Americans have no faith in the GOP tea baggers in the House. It just doesn't get much worse than that. In the meantime a bi-partisan group of 4 governors, 2 Democrats and 2 Republicans, including tea party darling Chris Christie, from states ravaged by Hurricane Irene - issued a joint statement chastising House Republicans for playing politics with disaster relief...

“Our states have been hit hard by Hurricane Irene and Tropical Storm Lee. While the flood waters have receded and the storms are passed, the damage to communities, businesses and infrastructure remains significant. Billions of dollars in loss and destruction pose a serious threat not only to local and regional economies, but to the nation’s economic recovery. . . . Federal assistance for the victims of storms and floods should be beyond politics. Within 10 days of Hurricane Katrina, Congress passed and the President signed over $60 billion in aid for the Gulf Coast. It’s been 28 days since Irene and Lee started battering our states. We urge this Congress to move swiftly to ensure that disaster aid through FEMA and other federal programs is sufficient to start rebuilding now.”

Not only are these tea bagging stupid assholes once again holding the entire federal government hostage, demanding drastic cuts to popular, successful and completely unrelated programs, the funding they did approve is woefully inadequate. FEMA is out of money. They need at least $6.9 billion just to meet current disaster relief needs. The GOP house bill, soundly rejected by a bi-partisan Senate, provided only $3.65 billion. 'Cause, you know, in this year of record disasters we don't really need disaster relief and besides, there won't be any more disasters ever, so why bother?

To put into perspective just how insanely stupid the latest tea bagger temper tantrum really is, keep this in mind: The emergency funding, even at the $6.9 billion level, amounts to less than 0.04 percent - 4 one hundredths of 1 percent - of the $1.043 trillion federal discretionary budget for next year. The tea baggers in the House are pitching a fit over an infinitesimally tiny amount of desperately needed emergency spending.

Meanwhile the "adults" in the GOP are mystified by this new, unexpected childish behavior from their pet tea baggers. This wasn't supposed to happen. This was an easy procedural vote. They can't understand how they've lost control. All they did was pander to a group of ignorant, stupid racist whiny ass tea baggers and then give them the power to control the entire party by means of political terrorism. Gee, how could that possibly have gone wrong? 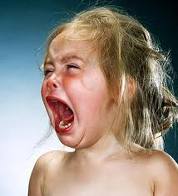 Yes, how could anyone have foreseen a problem with ceding power to the same strident idiots who cheer executions, cheer letting the sick die and boo active duty Army Special Forces troops serving in Afghanistan? Let's hope Charlie Cook is right. Let's hope voters toss out these idiots en masse. We have enough real problems to deal with without having to continually stop and try to placate the red faced screaming 2 year olds that make up too much of the GOP these days.
Posted by John Avignone at 11:38 PM