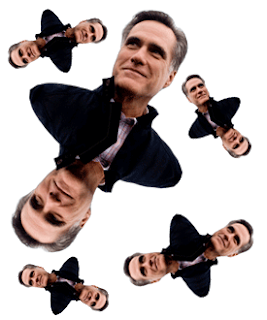 ﻿﻿﻿﻿ Mitt Romney and his magic underwear have learned a thing or two about public speaking. Specifically, Mitt demonstrates the maxim that one should always speak to one's audience. If one's audience is stupid, like the tea bagging idiots that comprise GOP primary voters, say stupid s**t. They'll love it! Case in point...

Romney likes to make fun of Obama by taking shots at Harvard. A standard line in his stump speech slams Obama for taking advice from the “Harvard faculty lounge.”

"But wait," the wingnuts whine, "No fair! That's not the same as taking advice from the “Harvard faculty lounge!"

In point of fact 5 of Romney's senior advisers are Harvard grads and 3 of them are Harvard faculty. Meghan O’Sullivan, who advises Romney of foreign policy, teaches international affairs at Harvard. Romney economic advisor Greg Mankiw is a high profile professor of economics at Harvard. William Martel, now a professor at Tufts University, is a Harvard post doctoral fellow. The Boston Globe points out...


Not only is Harvard a major player in Massachusetts, the state Romney led for four years as governor, but it also is the school from which he received the business and law degrees that helped propel him toward his highly lucrative venture capital career.
...
But Romney’s Harvard connection does not end with his own resume.
Like him, sons Tagg, Matt, and Josh all went to Brigham Young University as undergraduates. Then they also followed in their father’s footsteps by attending Harvard Business School.
...
Furthermore, a large number of the advisers who help Romney speak about foreign policy - the subject of his speech yesterday - are also Harvard alums or teachers.

This is to hypocrisy what black holes are to gravity. So, why does Romney keep using this obviously bogus attack? He knows the tea bagging ignorant morans who eat up this asinine ad hominem, aka GOP primary voters, are far too effing stupid to realize the stunning hypocrisy. Those few who can see the hypocrisy don't care as long as it belittles the black Kenyan socialist guy.
Posted by John Avignone at 9:55 PM