Public Religion Research Institute and Brookings released a poll on religious diversity 10 years after 9/11. The upshot is huge majorities of Americans strongly believe in religious freedom for everyone.

Except for Fox viewers, whose views diverge from the majority by a stunningly wide margin. They really are a stupid, ignorant, bigoted bunch of fools. 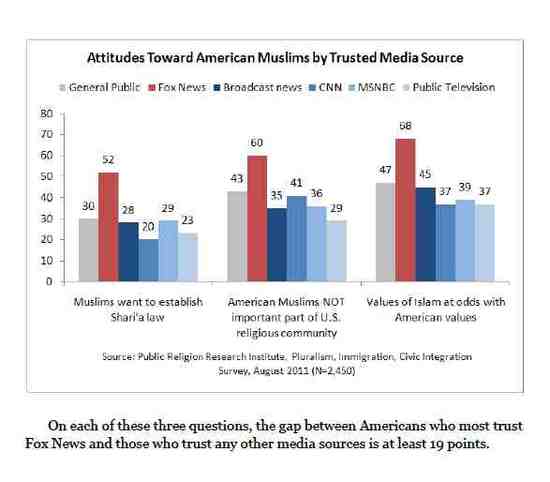 * 52% of Fox viewers believe Muslims want to establish Sharia law in the US, more than double the rate among normal people.

* 60% of Fox viewers believe Islam is not part of the American religious community, again, more than double the rate among normal people.

* A whopping 2/3 of Fox viewers believe Islam is at odds with American values. Apparently these imbeciles are unaware that Islam is based on the exactly the same moral foundations as Christianity and Judaism.

You can view the full results of the poll in PDF form...
Posted by John Avignone at 8:03 PM