An Open Letter To Occupy Austin... 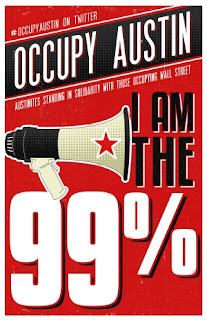 I offer up these observations and comments not as criticism of Occupy Austin leaders or participants, but as a strategic and tactical analysis and suggestions from a veteran of the successful culture wars of the '60's and '70's. I hope they are taken in that spirit. A quick look around the rest of my blog should be enough to see I'm an ally, not an adversary. I am unable to directly participate in the Occupy protests for reasons that are irrelevant to my point. For all I know, all of these ideas have been discussed and are either in the pipeline or have been considered and rejected for good reasons of which I am unaware. As always, I welcome comments, observations, agreements, disagreements and communication in general.

Austin is blessed with a plethora of bright, dedicated, experienced warriors for the American Dream. This is an invaluable resource Occupy Austin should tap. As someone who was active in street protests during the Civil Rights, Women's rights and Vietnam era, I'm a bit confused by some of the Occupy protests. Occupy Wall Street makes perfect sense. It's about time we stand up and protest greed and inequity and the corrupting influence of corporate money on our political system. To protest at the epicenter of American greed - Wall Street - makes perfect sense. I strongly support the Occupy Wall Street protests, I'm glad they're spreading and I encourage everyone to get involved.

Here in Austin, however, the Occupy movement has manifested itself as Occupy City Hall. What, exactly, did the Austin city government have to do with the Wall Street caused financial meltdown? Who are the "Masters of the Universe" that work at City Hall? In what way is City Hall the epicenter of American greed? How can one "occupy" a public space specifically and officially designated "as a gathering place for public discourse and community collaboration... for any public purpose or free speech assembly."

Am I missing something? This seems a bit like holding a sit-in to protest a lack of access to some specific site at a public park open to all. It's like protesting arbitrary rules and requirements by carefully abiding by the arbitrary rules and requirements. Protest? Not in any sense of the word as I know it and have experienced it. The most successful protests are all about harnessing civil disobedience in service of a just cause, not cramming the cause into an authority delineated box of civil obedience.

I stopped by Occupy City Hall yesterday (Friday) afternoon. I was heartened to see so many young people take to the streets - or, as in this case, the officially designated free speech assembly area, complete with porta-potties. But I couldn't help noticing that about half of the signs were held by our cast of regular local activists using Occupy to flog their pet local issues. Not that these activists or their pet local issues aren't worthy of attention. But they have little to do with the primary issue. 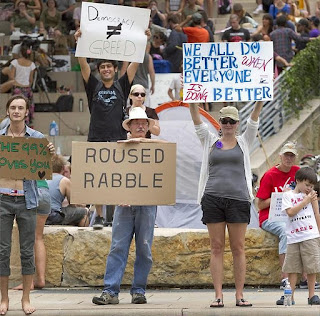 The other thing I noticed was it was more of a party than a protest. In typical Austin fashion, there was music, dancing, drumming and more than a bit of sweet smelling smoke wafting over the crowd, with APD watching benevolently from the sidelines. I enjoy all of these things as much as the next aging hippie, but once again none of this has anything to do with the point. In fact it takes focus away from the point and plays into the mostly false media narrative that it's just a bunch of dope smoking hippie kids playing bongos and having fun. There's nothing wrong with playing bongos and having fun. Unless it becomes your primary identifying characteristic. 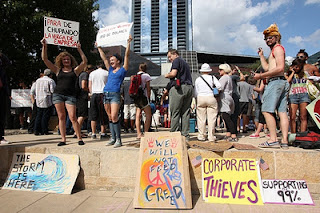 I poked around a bit and found out a few things. The Occupy protests are ostensibly headless, grass roots uprisings, but there's always leadership, even in a headless movement. Most of the main organizers of Occupy City Hall are college kids. Nothing wrong with that. Again, I think it's great that young people - who traditionally participate in our political system at far lower levels than any other demographic - are getting involved. However, it's always a good idea to seek out advice from the experienced.

So, as an experienced warrior in the culture wars of the '60's and '70's - wars we won, BTW - I offer up some unsolicited advice to the Occupy Austin folks. First, choose your targets carefully. Here in Austin, were I organizing Occupy protests against greed, inequity and corporate influence, I'd advise targeting for occupation, say, the McCombs School of Business at UT. Not only are college campuses a great place to protest - lots of exposure and in general tolerant to expressions of free speech - but here in Texas the McCombs school is the primary training grounds for the very "Masters of the Universe" OWS is protesting.

How about occupying The Domain? Not only is The Domain a tangible symbol of greed and excess, it received many millions of dollars in public money to the benefit the wealthy few. The "Masters of the Universe" may not be centered at The Domain, but their wives are. Send them a message and it's a sure bet they'll take that message home. Some of them, maybe many of them,  will even embrace the message. Hit 'em where they live.

How about marching on the Chamber of Commerce? Here's a target not only worthy as the local home of "Masters" and "Master" wannabes, it's rich in Austin-centric symbolism. The Chamber is headquartered at the ugly office tower that now sits on the land once occupied by the legendary Armadillo. I can think of dozens of other worthy local targets. Every major bank has a presence here. Why not occupy Bank of America or Chase? The big banksters really are responsible for much of the current mess. 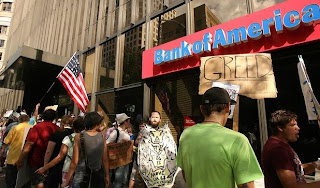 A small, short march, like the one on BofA on Friday, is a good start, but it's not enough. As statistics guru Nate Silver points out, the Occupy Wall Street protests got basically zip in major media coverage until the cops got involved.


...the protests in Manhattan, now in their third week, and in other parts of the country, have found two ways to draw attention to their cause. First, keep at it. And second, wait for confrontations with the police.

In the early days of the protests, which began on Sept. 17, coverage was all but nonexistent in the mainstream news media.
...
Coverage spiked after an incident on Sept. 24, however, when three protesters were hit with pepper spray by the police despite, apparently, posing no imminent threat.
...
It (coverage) then shot up again after mass arrests on the Brooklyn Bridge on Oct. 1.
...
The number rose again on Thursday, Oct. 6... This followed further clashes between protesters and police officers on Oct. 5, when there were 28 arrests and police were videotaped using batons and pepper spray.

Make them respond. The whole point of a protest is to elicit a response. The lesson is make the cops get involved and you get a response that generates more exposure. Be dedicated to nonviolence, but raise hell. Instead of a couple of dozen people chanting and holding signs for an hour, mobilize the many Occupy supporters and actually occupy the target of the day for the entire day. Make them drag you out. I guarantee you, you'll get exposure. With exposure comes growth. With growth comes power. With power comes change.

I offer up these suggestions because I believe the Occupy moment can be a true turning point in our political discourse. I believe it can and should be the start of something big. This is the kind of thing that comes along once in a generation, if then. I believe it would border on criminal to waste such an extraordinary opportunity. Fight. Fight for the right. But know that as in any battle, it's strategy and tactics that carry the day. And logistics. Never forget logistics.

Let's keep the focus on the bad players, not on us, not on a bazillion different unrelated issues. If we are united, we can do anything. We changed the world in the '60's and '70's. We can do it again. Well done, Occupy Austin. Beginnings are important. Now it's time to move on to the next logical step.