The Reality of Jefferson and Bogus Quotes... 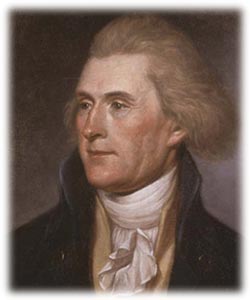 Lately I've seen a lot of progressives passing around a Jefferson quote about the banking system on social media to back up the OWS protests. Because I support the OWS protests and know something of Jefferson, this bothers me a bit. First off, the quote is bogus. It was fabricated in 1937 by conservative Republicans out to kill the New Deal. There is no record of Jefferson ever saying any such thing. In fact, as to the issuance of currency, Jefferson said exactly the opposite. Jefferson made clear his support for federal control of currency in a letter to John Wayles Eppes in June of 1813...


"The States should be applied to, to transfer the right of issuing circulating paper to Congress exclusively, in perpetuum, if possible, but during the war at least, with a saving of charter rights."

Even quoting Jefferson accurately is meaningless, as Jefferson was a walking contradiction. Jefferson didn't agree with Jefferson. Nor can he be dragged him out of his time and effectively used as a weapon in an ideological fight today. In addition to losing all context, most of his ideas simply do not stand up. In fact, most of them didn't survive even in his own day.

Today few people know much of the true Jefferson. Instead, the know the legend, most of which is simply not true. Jefferson has become something of a cottage industry in the world of historians, and especially historians who write for public consumption. The vast majority of biographies and histories out there either glorify Jefferson for current partisan gain or demonize him for the same reason. There's no question that Jefferson was a brilliant man in many ways, but there's also no question that he was a deeply, deeply flawed man in at least as many ways. He comes down to us as a true hero of the Revolution and a giant among the Founding Fathers not because he merits such hagiographic praise, but because his reputation was carefully rehabilitated by rabid partisans, much as the GOP has turned the disastrous presidency of St. Ronnie of Drool into a legend and as they're trying to do now with Shrub.

Jefferson was a walking bag of mostly water and self contradictions, which is why one can find a Jefferson quote to back up - or oppose - virtually any ideology or political position. Jefferson didn't even agree with Jefferson. For example, while it is true that Jefferson criticized Hamilton's banking system, he did so as a partisan, not out of ideology. Jefferson was more than happy to use the very system he had opposed to finance the Louisiana Purchase.

The Louisiana Purchase provides another window into Jefferson's hypocrisy. Not only did he use the very system he had opposed for his own ends, the Louisiana Purchase was very probably the single most extra-constitutional, imperial power grab by any American president. Strange coming from a man who espoused the proto-libertarian idea of a nation of self governing enlightened individuals with no central authority where power was "diffused." This is what we might today call a flip-flop, and one characteristic of Jefferson.

Quoting Jefferson on economics, finance or banking? By his own admission, Jefferson was an economic illiterate. He couldn't even manage his own finances. Because of his lifelong profligate spending, Jefferson's family had to watch while everything he had inherited and everything he had ever owned - including his beloved Monticello - was auctioned off by the sheriff to pay his massive debts. And it still wasn't enough. Jefferson's debt wouldn't be paid off until many years after his death, and then by his progeny. Jefferson knew he was an abysmal financial failure. It was a source of anguish for him. He didn't live to see the embarrassing end. He died just before the auction.

As a president, Jefferson was ineffective, to put it mildly. The successes of his first term, often cited as one of the most successful first terms ever, were thanks to a series of events and policies that had nothing to do with Jefferson and were in fact a direct product of the Adams and Washington administrations Jefferson had so strongly opposed. His first term success was more than offset by the abject failures of his disastrous second term, which were entirely Jefferson's doing. Through both terms Jefferson clung tightly to overriding executive power, anathema to his own beliefs.

Nor was Jefferson in any real sense a "Founding Father." His one and only accomplishment of note in the revolutionary era was the drafting of the Declaration of Independence, at the time considered an unimportant task and so assigned to the least experienced, least influential, most junior member of a Virginia delegation to the Continental Congress that included revolutionary luminaries like Patrick Henry and George Washington himself. Most of Jefferson's peculiar ideas never made it into the final draft. When our country really was constituted, he was in France and had nothing whatsoever to with the drafting or adoption of the Constitution. In fact he opposed the whole idea of a constitutional federal republic. He favored continuing under the Articles of Confederation, which had already proven hopelessly unworkable.

Jefferson was also entirely untrustworthy. As Washington's Secretary of State he did nothing but try in every way possible to undermine Washington's administration. He actively opposed the president he was ostensibly serving on every possible point. And he did it behind Washington's back, mostly through surrogates. He demonstrated this same type of disloyalty when he turned on his close friend John Adams.
In his long correspondence with Adams, a close friend who Jefferson had cynically libeled to gain the presidency, Jefferson admitted he had been wrong about, well, pretty much everything. Jefferson had hired a hatchet man to shower Adams with vicious personal attacks on his honor using the basest of lies and calumny. Later, Jefferson reaped what he had sown. The very same hatchet man he'd hired to slander Adams later, seeing Jefferson's rank hypocrisy for what it was, was the original source of the Sally Hemming scandal. The difference was everything Jefferson paid to be said about Adams was a lie. The Sally Hemming story was true.

Is this really the guy we want to hold up as representative of anything progressive? If anyone should be quoting Jefferson, it's the GOP or tea baggers. For all of his hogwash about abhorring politics, Jefferson was the original win at all costs, take no prisoners partisan in an age when "party," as in any political party, was a dirty word. He also favored state's rights, which even in his time meant slavery, and mistrusted government in general, a distinctive hallmark of modern conservatism.

For those that are interested in a more balanced view of the true Thomas Jefferson, one not colored by ideology, one that doesn't try to stuff him into a modern box, one of the best of the biographies accessible to the casual reader is 'American Sphinx - The Character of Thomas Jefferson' by Joseph Ellis. Read it. In the meantime, I'd advise caution using Jefferson quotes to support or oppose anything. They're likely to come back and bite you on the ass, just as they did Jefferson.
Posted by John Avignone at 7:43 PM