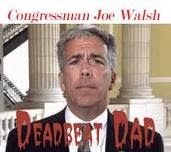 The Chicago Sun-Times  reports on the spanking by a family court judge of Tea Party freshman Congressman lying tea bagger "family values" hypocrite Joe Walsh, who seems to be more than $100,000 behind in child support...


A Chicago judge issued a preliminary ruling Wednesday against U.S. Rep. Joe Walsh (R-Ill.) in his child-support dispute with his ex-wife, ordering the Tea Party favorite to explain why he appears to be $100,000 behind in child-support payments.

Cook County Circuit Judge Raul Vega also wanted to know why Walsh wasn’t in court Wednesday — the McHenry Republican’s ex-wife, Laura Walsh, was there — and initially said he expected him to show up for the next hearing.

In court, Walsh’s attorney, Janet Boyle, asked Vega “for what purpose” he wanted the congressman in court.

Vega gave her a puzzled look — to which Boyle responded: “Mr. Walsh is a U.S. congressman.”
“Well, he’s no different than anyone else,” the judge replied.
...
She says her ex-husband started making half-payments years ago and then completely stopped sending any money. He claimed he was broke, she said.

But last year, when she saw he had made a $35,000 contribution to his own congressional campaign, she became suspicious about his claims that he had no money. She had her attorney file the motion that Vega granted on Wednesday.
...
Rep. Walsh recently hired Boyle — his fifth lawyer in the case — after attorneys were unable to reach a settlement at a private session a few weeks ago.

Well, SURE he's different, judge nit picker. He's a white male card carrying tea bagger Republican Congressman! Rules are for the little people! DUH! WTF is wrong with you? Since when is lying and hypocrisy illegal? And what kind of name is that, anyway? Vega? Sounds a bit brown for a judge...
Posted by John Avignone at 1:15 AM