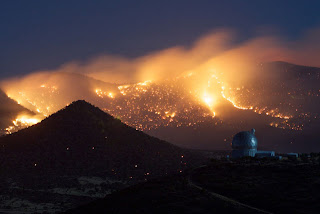 UPDATE: The latest on the Bastrop Complex fire can be found here...
There's not much good news to add to our earlier report. Authorities now say some 1500 homes have been destroyed and more than 5,000 people have been evacuated. Anecdotal reports are coming in of fire fighters losing their own homes while fighting fires elsewhere. Some volunteer fire fighters have worked 52 hours straight with no sleep, no rest, no relief and inadequate equipment and manpower. 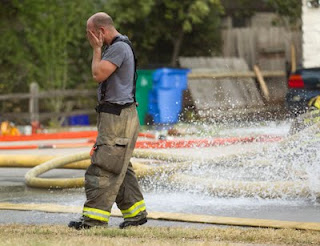 Encouragingly, A DC-10 tanker arrived from California, Wednesday, but it remains grounded as of now. There's no pilots qualified to fly the dangerous low level water bombing runs over populated areas. The plumbing system for dropping fire retardant also needed to be installed after arrival at Austin Bergstrom airport. No word on if or when that might be done. More than a week after this current breakout of fires, the largest now officially designated The Bastrop Complex wildfire, Texas can still only field a small fleet of helicopters and low capacity propeller driven water bombers to battle the blaze. 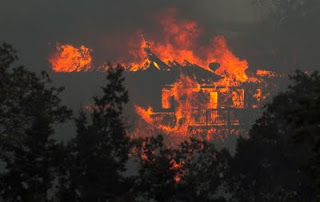 While the Bastrop fire is still uncontained, reports vary from 0%-30% contained, officials have reported progress on other fires, including the Stiener Ranch fire and fires near, Leander, Spicewood and Hamilton Pool Road. Officials report that these fires have largely been contained. For many home owners in Stiener Ranch, it's too little to late. 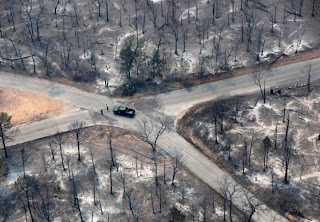 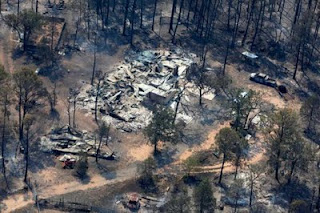 Here in Austin, 35 miles from the largest fires, Fire Department officials warned that smoke will likely affect the Austin metropolitan area for at least the next few days. Health officials say there is little long term danger to healthy individuals, but they advise people with respiratory problems or heart conditions, older people and small children to remain inside whenever possible. 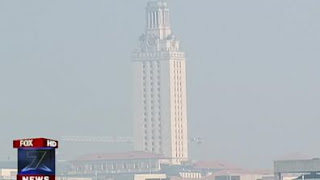 Volunteers, active and retired fire fighters, turned up from around the state and around the country in response to urgent calls for more fire fighters, most of them only to be turned away by authorities. Mike Fisher, Bastrop County’s emergency management director told the Austin American-Statesman, “We may have had some of the world’s finest firefighters showing up, but if they weren’t properly qualified or trained and had no equipment, we had no choice." Holly Huffman, spokesperson for the Texas Forest Service, told a local TV reporter, “With wildland firefighting, we have to have folks trained, qualified and credentialed. We’ve got folks that are self-dispatching and coming in and maybe aren’t credentialed in wildland firefighting. That just adds to the risk of someone getting hurt, and that’s the last thing that we want.” 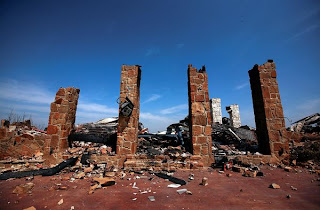 With access to the stricken areas still restricted and reporters kept well away from the flames, news has sometimes been frustratingly difficult to come by. Many have turned to Facebook, Twitter and other social media sources for updates. Specific calls for volunteers to move large animals and livestock quickly go viral. Official dispatches often go viral long before they can show up in the traditional press. The Facebook page for the Austin Celtic Festival has been instrumental in collating and relyaing information, passing on official reports and requests as well as personal requests, donation requests and anecdotal reports.

At this point it's crystal clear that we are witnessing not just a natural disaster, but a critical failure of government on a scale unseen before in recent Texas history. As news spreads that Texas governor and GOP presidential hopeful Rick Perry presided over massive cuts in funding for fighting wildfires has spread,  mostly through blog reports, anger has risen to the level where today the Perry campaign felt the need to issue a response, claiming the funding reduction was caused by the federal government. This is what is known in technical circles as a lie, and one likely to earn Perry yet another "Pants On Fire" rating from Politifact, adding to the 7 already dogging Perry in addition to 14 statements rated as "False" and 10 more rated "Mostly False" by the award winning fact checking website. Out of the 67 Perry statements reviewed by Politifact, only 17 were rated "True" or "mostly True," a record of mendacity unmatched by any other candidate. 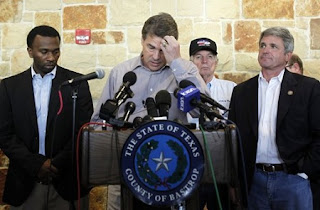 The fact of the matter is earlier this spring, even as wildfires already raged and more than 1 million Texas acres were burned or burning, Rick Perry slashed direct funding of local fire departments, tasked with fighting wildfires in Texas, by $23 million, from $30 million down to just $7 million, a reduction of 75%. He also slashed the budget the other major source of funding for fighting wildfires, the Texas Forest Service by $34 million, a reduction of about 1/3. Finally, he ignored $135 million is backlogged grants for local fire departments specifically earmarked for fighting wildfires. Then he called for three days of prayer for rain to put out the fires already burning. Faith based fire fighting. We can all see how that worked out.

Worse, Perry and the Texas GOP had been warned. Many times and by many experts. They were told back in 2008 and again this spring by the Texas Forest Service and every national wildfire expert to weigh in on the issue that Texas was sure to face, larger, more dangerous, more catastrophically destructive wildfires. Perhaps because these dire warnings were based on hard science and the reality of global warming - two things half witted fundamentalist moran Rick Perry doesn't believe in - they were completely ignored. Now we can see the result.

While Rick Perry is taking and will continue to take well deserved criticism, many of the reasons the response to this disaster has been so woefully inadequate predate Perry. Texans have bought into the myth of self reliant frontiersman. We believe our own press releases. And we believe in Gover Norquist's fantasy that government should be small enough to drown in a bathtub. Now we're paying the price. Perhaps this will end up producing something positive. Perhaps, in the harsh light of ashen reality, we'll reevaluate our own beliefs. Perhaps we'll find we need government, after all. Hey, it could happen...
Posted by John Avignone at 12:20 AM