You can find our original report on the Bastrop Complex fire here and updates here and here...

Reuters reports that fire fighters are making progress on the Bastrop Complex fire, now calling it 50% contained, but it's far from over. With the return of record heat, no rain in the forecast and winds expected to pick up again Tuesday, fire fighters are hoping to make significant progress today and tomorrow. As these pictures from earlier this (Sunday) evening show, they have their work cut out for them.

Rick Perry's office has released $250,000 from the Texas Disaster Relief Fund to provide vouchers for a week in a hotel to those who've been burned out of their homes. Am I missing something here? So far more than 2,000 homes have been destroyed statewide,leaving more than 7,000 homeless. $250,000 for 7,000 people for a week in a hotel? Is this supposed to be a fucking joke? Where are these hotels for $35 per week per person?

On Friday Barack Obama declared Bastrop County a federal disaster area, which will allow federal relief funds to flow. Perry, who has strongly criticized the federal government and joined in the GOP chorus of fools trying to hold FEMA funding hostage, is now begging the feds to declare the entire state a disaster area, opening the floodgate for boatloads more of those tasty, tasty federal dollars. Perry has supported calls to refuse FEMA the very funding he's now demanding. Never let it be said that Rick Perry let's a little thing like rank hypocrisy get in the way of his toadying. Whatever happens, it will take time to get emergency FEMA funds into the hands of fire victims. In the meantime the most Perry can offer victims is, "Good luck getting by for a week on $35 per person, folks."

Speaking of the federal government Rick Perry hates and has promised to make, "...as inconsequential in your lives as possible," FEMA has stepped in to fill the massive void left when Perry and the GOP gutted funding for fighting wildfires. In addition to taking over the command and coordination of fire fighting and relief efforts, FEMA is distributing fire suppression grants to local fire departments in 55 Texas counties.

Now, see, it was actually rilly, rilly klever of Perry and the GOP to gut fire fighting funds. Now we get piles and piles of those tasty federal dollars! Perry and the GOP can go back to focusing on the important stuff, like how to screw over teachers, trample on women's rights and destroy what little is left of the Texas health care system. Yee haw!

On the ground in Bastrop, the sheriff's office has released a list of 22 people ordered to evacuate who are still listed as unaccounted for. Bastrop County Sheriff Terry Pickering cautioned that the list reflected only that the whereabouts of these people are unknown. By the end of the day Saturday "several" of the people on the list had been located.


The others, Pickering said, "have not checked into a shelter. They could be on vacation. They could be with friends. If you know them, please have them contact us so we can be sure they are safe and sound."

The list of the missing has been posted at the Bastrop Convention and Exhibit Center and online here...

Here is the current re-entry map for Bastrop county...

Lists of structures destroyed by the blaze can be found here...

We'll post all of these links again at the bottom of this page.

In other fire related news, Rick Perry scheduled a press conference in Bastrop yesterday to view the damage and report on progress fighting the fires. After sending out an update to reporters with a location change, Perry was a no show. A Perry staffer told confused reporters...


Reporter Hollie O’Connor was on the scene and talked to Perry staffer Allison Castle, who said, “Our intention was for him to be here. The location we had was not open yet, so we weren’t able to get all of you into that area, and so we were working with officials to find an alternate location, and I think you all got the change of plans as we were trying to solidify things, so again, due to logistical issues, we weren’t able to get him here. We didn’t want to hold y’all up.”

Perry had just returned to Austin from a California campaign swing. There was no reason given, other than "logistics," for Perry's no show. Austin is only 35 miles from Bastrop.The roads are open. Logistics? 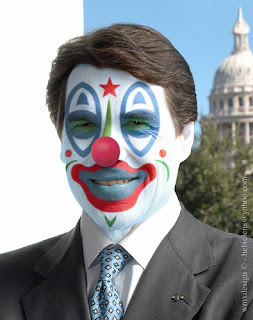 Yeah, logistics. You know, complicated stuff. Like making sure fire fighters have the funds and equipment they need to fight long predicted wildfires. But hey, at least he got to rake in a buncha bux in California for his campaign coffers, and isn't that what's really important?

Once again, here are the links for latest information from Bastrop County...