Texas, Stupid Texas - We Hate Perry, But Better Him Than The Black Guy 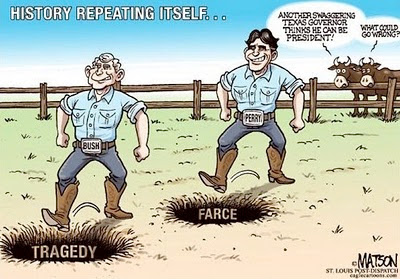 Jeez, I hate it when these Texas, stupid Texas stories pop, which is pretty much every story about Texas these days. It's just plain embarrassing. There are so many not at all stupid Texans, especially here in Austin, our little island of blue sanity in a sea of red bat shittery. Apparently the not stupid Texans are a minority.

With Bastrop still smoldering after Perry and his GOPhool pals slashed funding for fighting wildfires comes a new PPP poll that shows that while most Texans disapprove of the job Rick Perry is doing as gov, they'd still vote for him for prez. Just what we need is another idiot governor of Texas in the White House. Hey, what could possibly go wrong?

Key findings, from the PPP poll...


Rick Perry has an under water approval rating in Texas... but at least he is leading Obama
...
45% of Texas voters approve of the job Perry is doing to 48% who disapprove.  Those aren't good numbers
...
Perry leads Obama in a head to head 51-44.
...
Perry polls the best of any of the Republicans in Texas
...
Obama's approval rating in Texas is only 40% with 55% of voters disapproving of him. Most notable is that only 2% of Republicans give him good marks to 95% unhappy with his job performance
...
Beyond Perry's poor approval numbers Romney's favorability is a net -17 (32/49), Paul's is -25 (29/54), Gingrich's is -27 (29/56), and Bachmann's is -28 (27/55). With Obama's approval numbers what they are he should probably be trailing the entire Republican field by double digits. But he's not because of the unpopularity of the GOP candidates themselves.

So, all but 2% of Texas Republidolts hate Obama? Wow. That's a stunning number. Never underestimate the power of stupid people in large groups.

Perry's numbers aren't great. As PPP points out, McCain won Texas by 12 points. The bottom line is Texans don't much like Rick Perry. But they really don't like the rest of the Field of Fools GOP candidates. But hey, anyone is better than that Kenyan Muslim socialist black guy.
Posted by John Avignone at 8:58 PM