Analysis: The Credit Crisis - How We Got Here And Why

For the first time in the history of the United States our previosuly perfect credit rating has been downgraded. How and why did this happen and what can we do about it now? 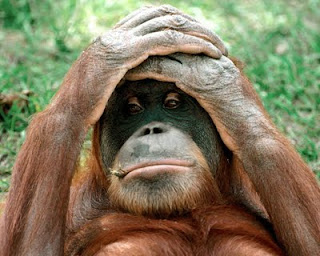 The National Journal has the best analysis so far of why S&P downgraded the credit rating of the US and what it means. The bottom line is yes, debt and spending are factors, but it was the spectacle of tea baggers in Congress holding a nation hostage to inflexible and insensible ideology and stubbornly refusing to consider any form of revenue enhancement that badly rattled Wall Street's trust in the good faith and credit of the US. It's clear to Wall Street, as it's clear to the vast majority of us who are not part of the tea bagging wing of the GOP that tea baggers in the House were perfectly willing to shoot the hostage - our economy - unless they got their way.

I highly recommend reading the entire piece at the National Journal website. In the meantime, here's a few excerpts...


The big new element on Friday was an official outside recognition that U.S. creditworthiness is being undermined by a new factor: political insanity. S&P didn’t base its downgrade on a change in the U.S. fiscal and economic outlook. It based it on the political game of chicken over the debt ceiling, a game that Republicans initiated and pushed to the limit, and on a growing gloom about the partisan deadlock.   Part of S&P’s gloom, moreover, stemmed explicitly from what a new assessment of the GOP’s ability to block any and all tax increases.

S&P was remarkably blunt that its downgrade was mostly about heightened political risks:  “The political brinksmanship of recent months highlights what we see as America’s governance and policymaking becoming less stable, less effective, and less predictable than what we previously believed,” it said.
...
But it’s hard to read the S&P analysis as anything other than a blast at Republicans.  In denouncing the threat of default as a “bargaining chip,” the agency was saying that the GOP strategy had shaken its confidence.
...
In previous projections, it said, its “base case scenario” had assumed that Bush tax cuts for the wealthy would expire at the end of 2012, while tax cuts for families earning less than $250,000 a year would be extended.  That, it said, would have reduced deficits about $950 billion over ten years.
But the new S&P base case assumes that Congress extends all the Bush tax cuts.   “We have changed our assumption on this because the majority of Republicans in Congress continue to resist any measure that would raise revenues, a position we believe Congress reinforced by passing the act,” S&P said.
...
“S&P's judgment was not that the U.S. could not repay, but rather, given the political process, that it might choose not to repay,” said Vincent Reinhart, a senior fellow at the American Enterprise Institute and a former director of monetary affairs at the Federal Reserve.  “That is in part a fall-out from Washington partisanship.”

Let's review how we got here. When George W. Bush took office in 2001 we were running a surplus, paying down our national debt and our economy was humming along at a record pace. Bush squandered the surplus he inherited, the largest surplus in history, by giving tax breaks worth trillions to the richest of the rich and by spending trillions more on two unfunded wars. Another nearly a trillion dollars was spent on a prescription drug benefit for seniors, a laudable policy, assuming it's paid for.

The fact is none of this profligate spending was paid for. Congress agreed to spend the money, but not pay the for the spending. The GOP put the entire tab on our national credit card. Eight years later Bush left office in the midst of a financial meltdown second only to the last GOP caused economic catastrophe, the Great Depression, having turned the largest surpluses in US history into the largest deficits in US history.

During the Bush years the GOP declared war on long standing regulations put in place after the Great Depression that were designed to prevent similar disasters in the future. As regulations fell new products flooded investment markets, many of them based on smoke and mirrors or worse. Bad loans and bad investments were bundled together and sold as top quality, rock solid investments, with the help of same ratings agencies threatening our credit rating today. When the truth began to come out that these invesments were mere bundles of worthless paper, markets crashed, home prices tumbled, unemployment sky-rocketed and global financial chaos ensued. Before leaving office Bush approved putting another trillion dollars on the credit card in the form of the TARP bailouts.

Enter Barack Obama, saddled with trying to clean up the spectacular financial mess left behind by George W. Bush. Republicans charge that Obama went on a spending spree of his own, but the fact of the matter is most of the spending they attribute to Obama was approved and signed into law by George W. Bush under TARP. The only new major spending by Obama was the auto industry bailout, which has turned out to be a good deal not just for manufacturer's, but for the entire nation. A major industry was saved. More than one million jobs were saved. Manufacturer's have since returned to profitability and are paying off the loans early. The government not only is being paid back ahead of schedule, but stands to make a profit on the deal. In the end we avoided a truly devastating blow to our economy, a knock-out punch from which there would have been no recovering.

Unlike the very real crises caused by Bush spending and the resulting economic downturn, the crisis over raising the debt ceiling was an entirely manufactured crisis; manufactured by the GOP. Never before in the history of our nation had a political party held hostage the inevitable and necessary raising of the debt limit. The very GOP leaders in Congress now holding the debt ceiling hostage had themselves voted to raise the ceiling many times before with no strings attached, as had their immediate predecessors over the previous two decades. 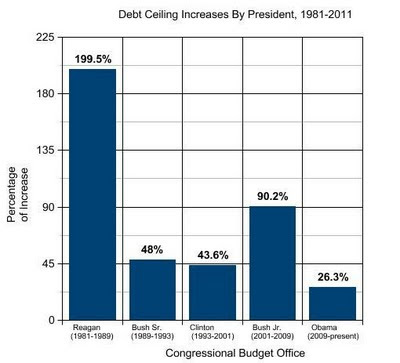 Under Reagan Congress raised the debt ceiling 17 times for a whopping increase of 199.5%. Congress raised the debt ceiling 5 times under Bush I for an increase of 48%. The ceiling was raised 4 times under Clinton totaling a 43.66 increase. Under George W. Bush the debt ceiling was raised 7 times nearly doubling the limit during the Bush years (90.2% increase). By contrast, Obama was seeking a much more modest raising of the ceiling of  26.3%. Rather than raise the ceiling with a one line bill as they had done 33 times over the past 2 decades, newly elected tea baggers in the GOP House, a minority in one half of one third of our government, announced their intention to hold hostage the debt limit unless they got their way, which flatly rejected raising revenues in any way to meet our obligations.

Keep in mind that this was not a fight about spending. In fact, Congress had already approved every penny of the spending in question. This was purely about whether or not we would pay up when the credit card bill came due. Republican leaders in both houses, especially John Boehner, tried to educate the economically illiterate tea baggers and forge a compromise which would have reduced spending while increasing tax revenues. Polls showed a large majority of the public, 81% in one poll, favored a balanced approach based on compromise. But tea baggers rejected out of hand any possibility of a compromise, will of the people be damned, making it clear to all that they were, indeed, willing to shoot the hostage if they didn't get their way.

It is this reckless disregard more than any of the underlying financial realities that rattled Wall Street to the point where for the first time ever our perfect credit rating was at risk. S&P has explicitly cited this manufactured crisis and the political dysfunction of a major party threatening to blow up the entire economy as the primary reason they downgraded our credit rating for the first time in history. S&P also said the probability if more tea bagger intransigence in the future may lead to further downgrading of our credit worthiness. They also specifically cite a change in their thinking about the expiration of the Bush tax cuts. While previously they had assumed the tax cuts would be allowed to expire, which in a single stroke would shave trillions from our national debt and greatly reduce deficits, they now believe tea baggers in the House will not allow this to happen.

These are quotations directly from Standard & Poor's list of reasons for taking action now...

It's crystal clear that they're saying it was stubbornness and stupidity that got us here and they predict more stubbornness and stupidity in the future. They didn't lower our credit rating because they think we might not be able to pay our debts. They lowered our credit rating because they think we might choose not to pay our debts. A large majority of Americans favor a balanced solution of spending cuts coupled with revenue enhancement. A large majority of Americans favor raising taxes on the rich, who are currently enjoying the lowest tax burden in modern history. A small minority in one half of one third of our government - tea baggers in the House, absotively posilutely refuse to even consider any such thing. And here we are, stymied by an ideologically inflexible, economically illiterate minority from doing what the majority knows is right.


The credit ratings agencies are hardly innocent in all of this. Nor are they omnipotent voices ringing down from from Mount Olympus dictating The Way Things Are for we mere mortals. It was these very same agencies that rated bundles of paper not worth wiping your butt with as AAA rock solid securities. But they are right to be concerned about our future. If we continue to allow a small and irresponsible minority to dictate suicidal policy, we will all be the victims.
Posted by John Avignone at 7:36 PM