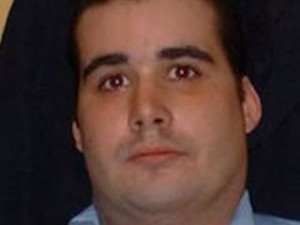 From Richard Handl's Facebook Page
I'm usually a big fan of DIY projects, but there are some things that are best left to the experts. Case in point, nuclear reactors. From the Associated Press...

A Swedish man who was arrested after trying to split atoms in his kitchen said Wednesday he was only doing it as a hobby.

Richard Handl told The Associated Press that he had the radioactive elements radium, americium and uranium in his apartment in southern Sweden when police showed up and arrested him on charges of unauthorized possession of nuclear material.
...

"I have always been interested in physics and chemistry," Handl said, adding he just wanted to "see if it's possible to split atoms at home."

The police raid took place in late July, but police have refused to comment. If convicted, Handl could face fines or up to two years in prison.

Although he says police didn't detect dangerous levels of radiation in his apartment, he now acknowledges the project wasn't such a good idea.

"From now on, I will stick to the theory," he said.

Posted by John Avignone at 8:14 PM