Kay Bailey Cheerleader On GOP Shutdown of FAA: "Not Honorable" 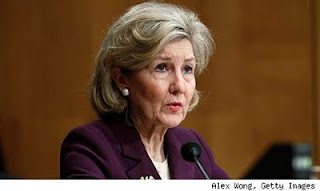 Every once in a while our do nothing senator Kay Bailey Hutchison actually stands up and does something. Yesterday was one of those days. CNN reports...


"We're getting ready to leave for a month. We should not shut down the FAA because of a rider put on the extension of the FAA legislation that has not been negotiated," Hutchison said.
"It is not honorable for the House to send an extraneous amendment" on a funding extension, she said.

Hutchison was bucking her own party on the GOP driven shut down of the FAA. Republicans refused to authorize the FAA, which had been running on a series of shirt term authorizations, for the first time in the history of the agency. Republicans are holding the agency hostage in an attempt to kill of unions representing aviation workers, including the 4000 FAA employees currently on furlough.

One of the consequences of the shutdown is as of July 23 the FAA stopped collecting federal taxes on airline tickets that pay for air traffic controllers, among other essential items. Contrary to early claims by the Fox Fux and other wingnut idiot media, this did not result in lower air fares for consumers as airlines simply pocketed the difference. In fact, in anticipation of higher operating costs due to the shutdown, ticket prices have gone up.

In addition to the 4000 FAA workers off the job, the shutdown will impact an additional 70,000 construction and support workers as projects are put on hold. More from CNN...
Posted by John Avignone at 5:46 PM