How hot was July? So hot that... Records Tumble Across The US 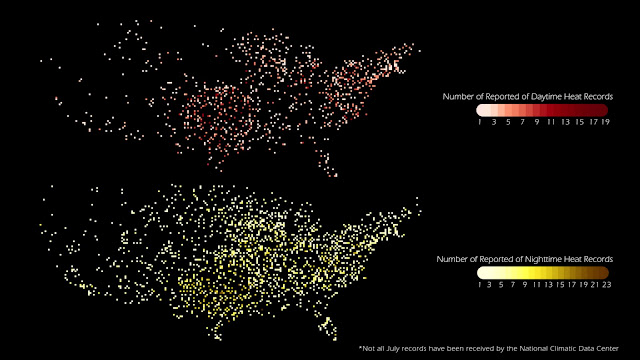 In response to the ongoing devastating heat wave, the Fox Fux and the deluded idiot denier fools who listen to them have amped up their war on science. Just in the past week Fox shouters have touted a study by an Exxon paid "scientist" so bad at his job that his last three papers had to be revoked for serious errors of math and logic that would embarrass a 6th grader. Then the Fox Fux told us SpongeBob Squarepants was a plot to indoctrinate children into the GW religion. Douche Limpballs chimed in and told us the heat wave is a government plot.

Shockingly, there seem to be millions of people gullible enough, foolish enough and stupid enough to gulp down these huge, steaming piles of asinine, illogical happy horse shit like puppies on fresh puke. Well choke this down, idiot deniers. From the Environmental Visualization Lab at NOAA, part of the National Environmental Satellite Data and Information Service...

How hot was the month of July in 2011? So hot that just by plotting the location of each daily heat record that was broken, a nearly complete image of the contiguous United States is visible. Almost 9,000 daily records were broken or tied last month, including 2,755 highest maximum temperatures and 6,171 highest minimum temperatures

They go on to say that the image above is incomplete...

The statistics reported here only include weather stations with real-time electronic reporting, which accounts for about two-thirds of the locations. Final numbers should be available later in August.